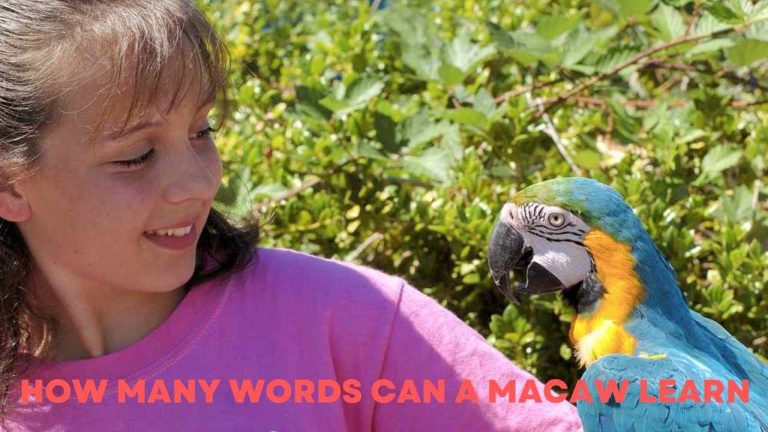 Macaws are incredibly individualistic birds, and if your primary motive for having one is their speaking abilities, you’ll be better off purchasing it from a reliable breeder rather than a local pet shop.

Pet owners enjoy their pets just as much for their personality and companionship as they appreciate their talk capability.

The African Grey parrot has a vocabulary of between 300 and 1000 words and phrases. It is considered to be the most intelligent parrot. But the Amazon parrot’s vibrant plumage and the playful Quaker (or the Monk) parrot’s vocabulary are impressive. The size of a parrot affects the extent of its vocabulary.

Can You Teach A Macaw To Talk?

Yes! You can teach a macaw to talk. If there’s something unique you’d like your Macaw to be able to communicate, There are ways for you to motivate them to learn. While there is a specific technique to this, an abundance of “natural” skills are involved.

Macaws are naturally inclined to communicate. They don’t have to be actively taught a new language and can just repeat what they have heard.

Like a toddler who is learning to repeat what they say, be aware of the words you speak to your macaw. There are a lot of stories of a macaw being sucked into a swear word and deciding to repeat the word at the most inappropriate times. Although some might consider these jokes amusing, they aren’t always appropriate and do not precisely reflect well on you.

How Much Can Macaws Learn?

Macaws are majestic feathered birds and the largest parrot species. They love to socialize, even though they may not be able to talk. This interaction should be used to train them. Some macaws mimic their keeper’s voice and start to mimic it; this is your chance to help it learn new words and expand its vocabulary.

Macaws use words and verbal vocabulary to communicate. Your macaw will know fifty words and 50 body signals. This allows it to combine them into several signals of communication.

How much time does it take for macaws to learn?

A macaw can take several months to learn to speak. It is difficult to predict how long your Macaw will take to catch on. It varies greatly from bird to bird.

However, once you have decided what to teach your Macaws, you will need to practice it!

5 macaw with the most extensive vocabulary

It is famous for its gorgeous plumage and sweet, clear voice. They’re intelligent birds that may be a little too friendly for sure. They can speak for hours if appropriately trained and have an average vocabulary of 300 words.

It can learn up to 250 words depending on how it interacts with its owner. They can start using human words around four months of age. They can mimic words of their environment and are excellent mimics. We love Indian Ringnecks and recommend them to be petted.

It is universally acknowledged as the most intelligent parrot. Some African Greys have a vocabulary of over 1,000 words if they are trained well.

Although research suggests these parrots may be able to use their vocabulary to make it seem like they are having a conversation with someone, it has not been proven and will only happen after years of training.

He has excellent clarity of speech and is well-known for his mimicry. They can also mimic sounds and sing whole songs, which can be used to fool their owners.

What affects a bird learning how to talk?

There are many things you must take into consideration. Here are some of the facts:

Parrots may have different personality traits, just like humans can be introverts or extroverts. How successfully a bird learns to speak can be directly affected by its personality. Some birds will not speak for the rest of their life. It is essential to acknowledge this fact as an owner and not decide to purchase your bird based on it.

Parrots must move their tongues forward and backward to change the sounds. They must do something similar as burping from their trachea to make plosive sounds, such as “b” or “p.”

Bonded parrots believe their human owners are part of their flock, so it’s worth the effort. They also love to sing our songs.

If you wish to teach your bird to speak, it’s crucial to build a strong connection between you and your animal.

Birds younger than toddlers learn faster how to speak. The young birds are more adept at learning, mainly if they are observed during the critical phase.

Ravens can learn to speak only during their critical period when their nervous system reacts to certain stimuli. It may prove difficult for an organism to learn a skill or trait if it does not. One reason that age can affect your ability to learn how to talk is that younger birds have a stronger bond than their parents.

A strong bond can be a tremendous facilitator in the learning process. It takes a lot of effort to teach a parrot how to speak. This effort is often more rewarding when the parrots try to communicate with their humans, who they consider part of their flock.

Male birds tend to speak louder than their female counterparts. This is because male birds are more likely to vocalize than females. They also need to vocalize to protect their territories and defend themselves from predators and other birds.

But there are frequent exceptions to the rule. If you invest a lot of time training them and they wish to, female bettas and budgies can learn how to talk.

For African greys and Amazons, for example, the gender of the bird has no bearing on whether the bird communicates.

Understanding that certain bird species speak better than others is essential. For example, Amazons will speak more clearly than Quaker parrots.

There is a chance that the macaw will not be able to communicate with you if you do not interact with him often. You want your fun-loving Macaw comfortable enough to train with you.

Be friendly with your bird friends and be social. You shouldn’t shout at your bird or cause harm.

A happy, fun-loving macaw will be more likely to communicate with you. A pet’s well-being is more than just keeping their cages clean and giving them a healthy diet.

It is essential to make their environment fun and enriching. To keep their minds sharp, they need lots of entertainment.

Talking takes effort. Macaws may not be motivated to communicate.

Some birds will repeat your words, while others will squawk for years. Some people learn for pure satisfaction, while others seek some kind of reward.

It is vastly different from having ten training sessions per day in one afternoon than ten over a year.

You must practice a word every day if you want your child to be able to understand it. It is impossible to expect your parrots to always pick up on words you don’t use.

How can a macaw learn to talk?

Like many parrots, you can teach macaws to speak. Your macaws talk well by repeating various words. You can get your macaw to answer a question or to repeat a phrase if it is proficient at this. It will take patience and time to teach a macaw how to speak, but it is fascinating and fun.

Teaching Your Macaw to Imitate You

1. Select a simple word. Macaws take a while to learn how to mimic words. Simple words are easier to master. Your friend should learn the words that you give to them. It should be one syllable and a common word.

2. Repeat the word often and clearly. Look at your bird and ask it what word it wants to know. Slowly speak to your bird so it can hear the sounds better. The most effective results are when you repeat the word several times. But pausing for a few seconds between every repetition is crucial.

3. Treat your friend as soon as they make a sound. Macaws can be social animals and will “talk” to you back. Although they won’t be able to pronounce the word correctly, they will likely try. Give them a treat if they make sounds after you say the word. This encourages them and motivates them to try again.

4. Continue to praise your macaw and reward it for doing so. Give it treats and lots of praise every time it says something after you have said the word. The macaw should become more proficient at correctly pronouncing the word. Be incredibly kind when it gets near putting the word down!

5. Next, you can move on to another word. When your friend can clearly and consistently imitate the word you’ve spoken, it’s time for them to begin working on a second one. The number of words a macaw can learn will depend on age and personality. However, most macaws are capable of learning many.

6. Associate words with actions and objects. Macaws learn best when they see that the word you want to imitate is linked to another. You might give your friend a slice of apple each time you use the word. You could also wave to your friend when you train your macaw “hello.”

The bird will be more likely to master quickly if you provide them with something it’d like to have, for example, a favorite food item or a treat.

Macaws make lovely pets. If you want your macaw to be able to communicate well, it will need attention from its human mate. If you spend time with them, care for them, and show affection, they will behave the way you want.